My Hero Academia manga 311 raw, My Hero Academia 311 reddit, Boku no Hero Academia 311 release date, read My Hero Academia chapter 311 online free.
– Chapter begins with Endeavor fighting some random villains.
– Endeavor notices one of them is using a nail gun support item and blames Detnerat because it’s way stronger than it’s supposed to.
-After villain gets hit by a new technique “Ignited Arrow”, villain says it’s all Endeavor’s fault, to what Endeavor responds with “and that’s exactly why I’m doing this”.
-He then hands the criminals to the police and goes to Jeanist and Hawks
– Jeanist comments that once again they knew nothing about Shigaraki or AFO. Endeavor agrees and far away he sees civilians protesting against heroes.
– Protesters call the heroes “gods of the plague” and blame them once again, they say that the media is saying villainous target is someone else so the heroes are once again hiding something from people.
– Hawks, Jeanist and Endeavor sit in the car and drive away. Hawks is talking to Edgeshot about the investigation on the Paranormal Front. Endeavor then comments that even after they started to use Deku as a bait, the league still hasn’t shown up.
– Jeanist and Endeavor are discussing the villain’s plan. They’re starting to believe that Deku was right when he said AFO’s top priority is getting full control over Shigaraki’s body, that’s why he has not appeared on the battlefield.
– Hawks confirms that Doctor Garaki is still under arrest and that according to him Shigaraki’s incomplete body was the reason the villains didn’t win, so that their main goal is to complete his body in order to make it possible to steal One for All.
– Changing topics, they say that even if the stronger villains on the streets know nothing about AFO and Shigaraki’s whereabouts it’s time to change their plan.
– All Might is watching Deku’s GPS signal and worries about the fact he hasn’t slept at all, remembering the times when Nighteye was worried about him not being able to rest on a comfortable bed. He hears a “beep” and notices Deku’s GPS signal is gone.
– Some sort of device hits Deku’s phone and a voice starts coming from it. It’s the villain lady from Tartarus, she has a giant sniper coming out of her elbow.
– The lady wants deku to come with her. Deku immediately understands that she knows who he is, so that means she’s the first villain sent directly by All for One. Chapter Ends. 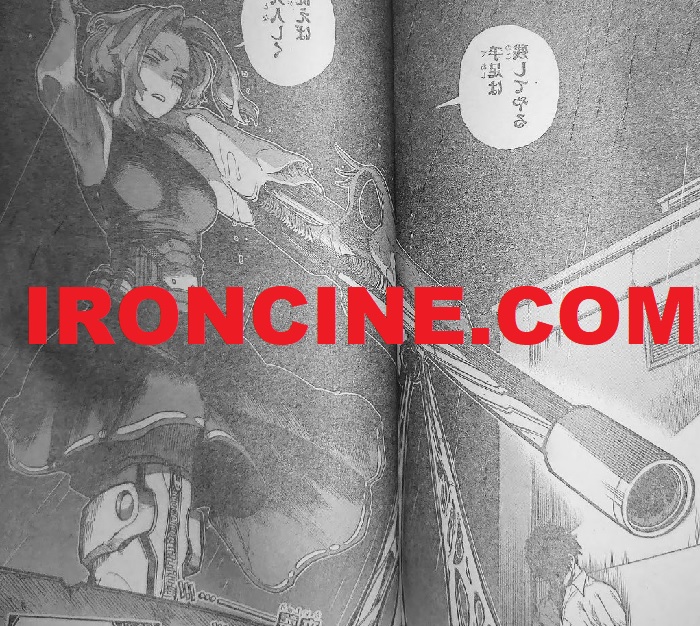