In this post you will find all the information ⭐ about the manga My Hero Academia chapter 369 ⭐ From the release date, spoilers, summary and leaks images.

My Hero Academia manga 369 will be released this October 7 on capitulo.tvymanga.com.Bellow are the spoilers.

The chapter begins with a flashback of All for One choking the second user as he’s bleeding. He says that his quirk was only capable of controlling small objects, and we see AFO crushing a bullet headed his way from behind without touching it AFO says that he was an annoying insect with an quirk that was no more than a little hindrance, so he doesn’t understand why Deku can use it in such a strong way and why he can see the Second and Yoichi’s «ghosts» behind the boy The quirk is stronger because of One for All and can now control each cell individually. Used together with the raw strength of OFA gives rise to a power that is able to distort the foundations of the world.

Next, Deku hits TomurAFO with a QUINTUPLE DETROIT SMASH Deku is flying around the battlefield like a bullet, but TomurAFO notices that his last blows were not as strong, probably because he has no more fa jin in stock. He prepares to intercept the next blow, but Deku shifts into first gear and slows down to avoid it Danger Sense activates and Deku sees that TomurAFO is going to hit him, so he uses Smokescreen, jumps high with Float and pulls TomurAFO with Black Whip. He then prepares his next attack, charged with Fa Jin that he stored with the Quintuple Detroit Smash.

The 2nd user says that what TomurAFO should fear is not the quirks, but the «will» that dwells within them. Deku remembers Banjo’s word that he would be the one to complete One for All and yells that he will end it once and for all, so that AFO won’t hurt anyone else The punch was so strong that it opened a hole in TomurAFO’s chest. Yoichi says that he can see his brother inside and that what the round-eyed young man (Mirio) said is true: this long fight is affecting the fusion between All for One and Shigaraki.

The 2nd says that the real deal starts now, that he needs to remember Shimura’s words and that he cannot pass out yet. All for One begins an internal monologue saying that it’s unfair because he has not yet been able to use any quirk to show how strong his new body is. Erasure, the flying U.A, the villains being divided, everything acted against him. This is when AFO screams and nine lights very similar to the OFA ones appear next to him. Deku looks confused and Aizawa wonders if he still has some trick up his sleeve AFO then finishes his internal monologue by agreeing with Yoichi, saying that if all the efforts accumulated through the year are going to define the results of this battle, then he still has a winning chance. Cut to Spinner, who’s giant and drooling. 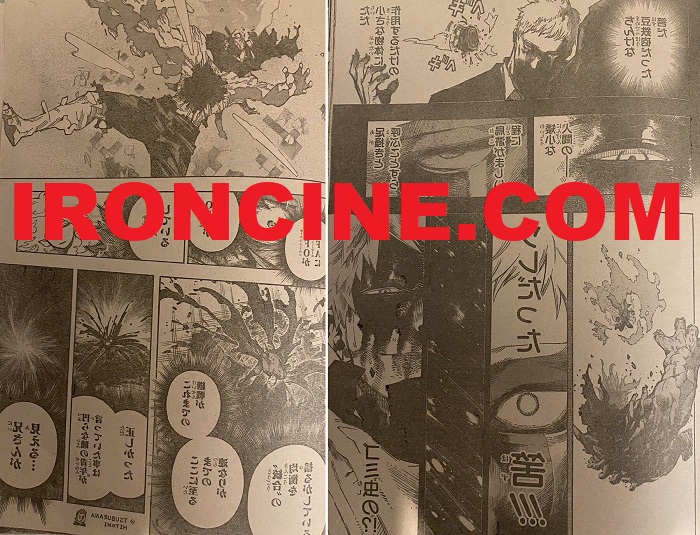 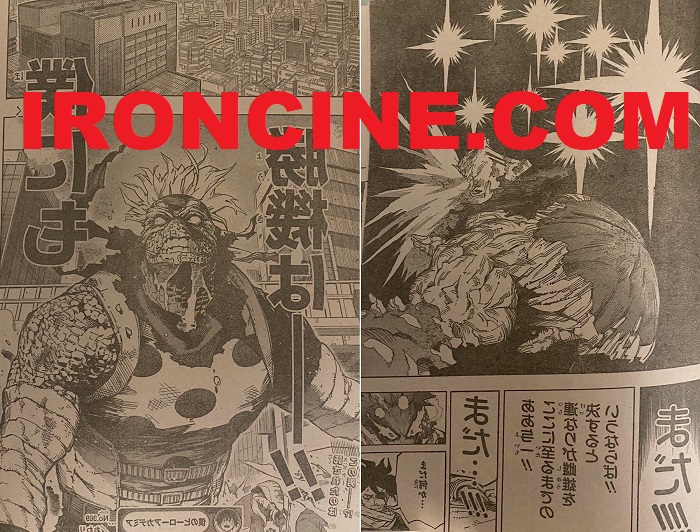